Outta the Frying Pan and Into the Fire

Well July just started and it's almost August! Shoot if time don't just keep a marchin' on? Seems like the older I get, the less time I got. Now if that ain't a sweet piece of Hillbilly wisdom for all y'all to chew on.
But shoot, it's okay, it may've seemed like a short month, but dang if we didn't get a lot accomplished in them there 31 days. First up, let me give y'all an update on our building. We done tore out the ol'ceiling! Take a look at this here photo (a pictures worth a thousand words as they say...and I'm a guessin' you gots better things to do with your time then read a thousand words) 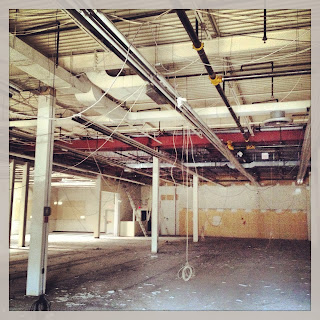 Yep, the ceiling is gone, but we still gots a lot a work a head of us. Next up, the floors!

Listen here, July also proved to be a pretty good month for us too as we took home two Silver medals at this years U.S. Open Beer Championships! That's right folks, our Ol'Woody Alt & Long, Dark Voyage to Uranus (Barrel Aged) took home some sweet silver hardware in the Alt and Barrel Aged Imperial Stout categories respectively. Purdy darn good if I don't say so myslef!  But get this, we also took home the Judges award for the "Most Creative Name". Out of over 2,500 entries our Long, Dark Voyage to Uranus took home top honours. Shoot if ya don't believe me, check it out fer yerself -

We're all purdy happy about the results and guess what, hot on the heals of these big wins Long, Dark Voyage to Uranus is comin' to the LCBO! That's right folks, come this September y'all be able to pick up our Imperial Stout at your local LCBO store. Now, we done changed the label some, so if y'all need a little reminder of  what it looks like, here it is - 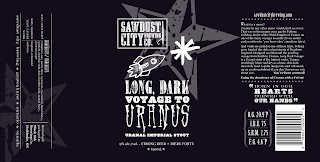 Now Spinney and I, we done brewed it just last week and it's tastin' mighty fine if I don't mind sayin' so myself. But it's gotta age a little before we send it out, so you gotta hold tight. Now if y'all can't wait til September to get yer hands on some of our "bigger" seasonal offerings, well then we gots some purdy good news for y'all! This years version of "The Princess & Girlpants Meets the ODB" is available as we speak at kick ass beer bars near you.  Aged for two months in Gamay barrels from Malivoire Winery and Chardonnay barrels from Southbrook Estates, our hoppy Belgian Golden has turned into a whole new animal! All that barrel sittin' got done got the Princess all tarted up and she's ready to hit the town! With subtle hints of oak and a cheek puckering tartness this 9% Golden Ale is sure to please once again.  It y'all can't remember what the label looks like, take a gander - 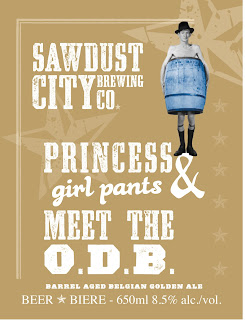 Now that ain't the only barrel aged beers we have available right now either! As of today (that is if you're reading this on Friday, July 26th...if not, then disregard the today part) we're releasing our 1 Bourbon, 1 Scotch, 1 Biere Series at the Toronto Festival of Beers. Featured in the Barrel Brews tent at this years fest will be our 3 offerings along with a number of other Ontario Craft Beers aged in all sorts of different barrels.
Now what we done did, is we took our Alt and aged it in 3 different barrels to see what would happen. As you might be able to guess we aged it a bourbon barrel, a scotch barrel and an old dirty wine barrel (along with some tart cherries from our friends at Cherry Lane in Niagara).

If y'all can't make it to TFOB, our good friends at WVRST in downtown Toronto are goin' to be featuring these three beers at their restaurant. So keep an eye out for that and try it out. I gotta say, I'm really diggin' on the Alt with tart cherries, it's tastin' might fine.

Shoot, then it's August! And dang if August ain't gonna be crazy! We gots lots lined up, purdy much every weekend is loaded with festivals and what not. Startin' with the Civic Holiday Long Weekend. We done got three events! Count'em 3 events. First up is the Parkin' Lot Party at the Griffin on Friday, August 2nd. Along with our good pals at Lake of Bays and Mill St Brewery, we gonna fill up the Griffin parkin' lot with beer, music and food. We prolly gonna have a special cask on hand to celebrate the most holy of all holidays in Ontario...Simcoe Day! Guess what's gonna be in the cask?

It's gonna be a fun night but we ain't got no time to rest, cause the very next day is Session Muskoka! An all day, all beer event at Annie Williams park in Bracebridge and we done brewed 4 special beers just for this occasion. In collaboration with the good folks at the Griffin, we had 4 staff members/friends come by our pilot system to brew some very special beers. We gots "Leather & Lace" (Honey Heffe Halapeno...yes I spelled that right), "Diana Sauce" (Chocolate Vanilla Blueberry Milk Stout), "The Carney" (Lemon Sage Belgian Strong Ale), "The Pith Helmet" (Grapefruit IIPA).

Now all these beers gonna be pourin' at the Griffin booth so after you stop by the Sawdust City tent and have yer fill, head on over there to try these special beers and remember to vote...cause there be a winner!
Y'all best get yer tickets fast as they be sellin' quick. For more info and for tickets, peep the site -

And if ain't enough, the very next day we gonna be at the Bazilliontth Annual Kashe Lake Craft Show and Sale.  We had a fantastic time last year showin' off our beer and talkin' with the good folks down on Kahshe Lake and we're super excited to be comin' back again. 'Cept this year we're bringin' way more beer so be sure to come on out for some good times and some great beer.

Now that was just the first weekend! The next one is just as crazy as we are headin' East to Oshawa for a Tap Takeover at the fabulous Buster Rhino's Southern BBQ. We're bringin' 6 beers on draught, including our very new and aforementioned Princess & Girlpants Meet the ODB  and one cask of our Bourbon Barrel Aged Alt (it's the only one in existence). It's gonna be an all party with delicious Southern BBQ and home grown Ontario craft beer. If y'all want some more info, peep this here event page -

The very next day, with a belly full of all that delicious BBQ and a brain full of way too much beer, we gots to get up early and head back to Toronto for The Only Cafe's Summer Fest! Speakin' of The Only...now I maybe gettin' a little ahead of myself cause this ain't gonna happen til, THURSDAY, SEPTEMBER 19th, but we gonna be doin' our 2nd Annual Mighty Mustache Competition for Toronto Beer Week at The Only Cafe.  And this years event is gonna be even bigger than last years. Thanks to our good friends at Amazing Clubs Canada, the winner of this years event will not only take home the coveted Golden Cant Hook, but he'll also get his face on a beer label that will go on over 150 cases of beer and be delivered to homes across Ontario as part of the Beer of The Month Club. Now if that ain't a purdy darn good prize, I don't know what is?  So get yer dusters growin' boys!

Now where was I? Right, August. Well the next week we're goin' even Easterer...we headin' to the Nations capital for the National Capital Beer Festival. This be our first trip to Ottawa as the Sawdust City Brewing Co., so we're purdy darn excited. We're join' a purdy sweet list of craft breweries for this fest and we're hopin' to make some new friends, so peep the site and come out to try some great craft beer -

But like I said, this a busy month, so we're pullin' double duty that weekend with half our team stayin' home to support another great local event, The Gravenhurst Chamber of Commerce 22nd Annual Dockside Festival of the Arts. 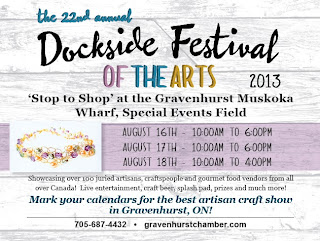 Man o'man, that certainly is a busy month fer this here small comapny, but that ain't a bad problem to have! We're glad to do it. Now, I prolly missed a few things here and there, so keep yer eyes and ears on this here blog, our Facebook page and our twitter feed and check back real regular like cause we be postin' new stuff all the time. And if y'all into the instagram, pop by our feed at sawdustcitybeer

Anyhoo, that just about does it for now. Until next time, keep the beer in your mugs and the sawdust beneath your feet.